St George’s Cathedral Consort is the premier mixed-voice choir in Western Australia and is frequently hailed as the leading choral ensemble of its type in Australia. Formed by Dr Joseph Nolan in 2009, the Consort complements the Cathedral Choir and performs during the highly acclaimed St George’s Concert Series.

Listen to the Consort sing the Gloria from Martin’s Mass for Unaccompanied Double Choir.

The Consort has performed on numerous occasions at the Perth Festival, including Arvo Pärt’s Passio with The Hilliard Ensemble and West Australian Symphony Orchestra players; Haydn’s The Creation with the Academy of Ancient Music; Tallis and Striggio: Music in 40 Parts with I Fagiolini, at Perth Concert Hall; and Tenebrae et Lux: Carlo Gesualdo’s Tenebrae Responsoria.

Reviewers have been unanimous in their praise for the Consort. They have been described as elite, world class and producing a sound akin to the evanescence of snow by The Australian and The West Australian newspapers. In a review of the Haydn concert, The Australian commented: The St George’s Cathedral Consort was on excellent form, singing with crisp articulation, faultless intonation and impeccable unity. The West Australian also applauded the singers, declaring that under the expert direction of Joseph Nolan, they can now truly be called world-class.

During 2019, the Consort sang in two magnificent celebrations of Bach – St Matthew Passion in April and Christmas Oratorio in December – and in 2021, they are performing in Bach’s Easter Oratorio – all at Perth Concert Hall.

In early 2021, the Consort performed for Musica Viva and at the Perth Festival to rave reviews. Seesaw Magazine reviewer, Rosalind Appleby, stated The Cathedral Consort shone in this repertoire….you would be hard pressed to find better performances anywhere in the world. 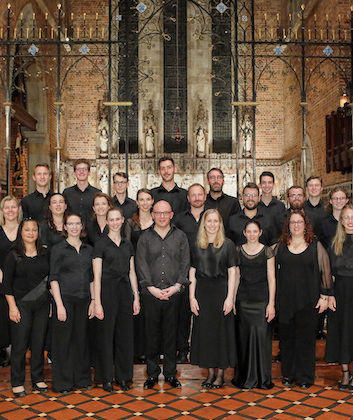 SINGER SUCCESS:Tenor Jeremy Budd is now a major player in the London choral scene singing as a regular with The Sixteen.