The King of Instruments in Concert 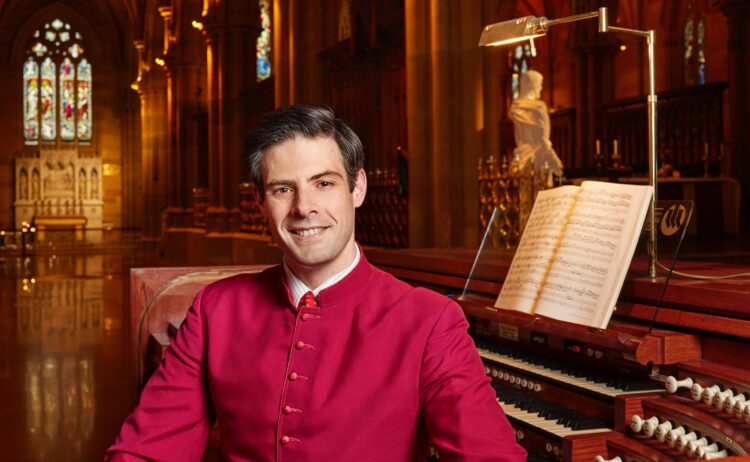 Sydney organist Thomas Wilson flies to Perth in August to present a ‘large landscape of a concert’ at St George’s Cathedral.

Dr Joseph Nolan has invited Thomas Wilson to present this year’s prestigious Sir Francis Burt Memorial Concert. “Deciding to invite Thomas to play in the Cathedral was a no brainer”, Joseph said. “He is a very fine musician, and the pieces he has chosen to play will create a large landscape of a concert.”

The acclaimed Sydney organist will present a program of bold and exciting works to demonstrate the joy of the organ as a concert instrument. In his words:

The organ marries mechanics and music in a truly wondrous machine, rightly known as the ‘king of instruments’. Yet many people only hear it played at weddings or funerals. The majestic sounds deserve to be heard, especially as so much of the greatest music ever composed belongs in the organist’s repertoire. We don’t want to keep this a secret. If you’ve not heard the organ played in concert, let this extraordinary instrument, the glorious building and the masterful music persuade you!

Louis Vierne’s Third Symphony provides a musical feast of textures, colours and forms across this inventive, substantial work. The phantasmagorical sound world of Frank Martin’s arresting Passacaille offers a profound contrast, whilst demonstrating the incisive tone clarity of the keenly voiced pipework of the St George’s organ. It feels only natural to play an emblematically English work in a cathedral dedicated to St George, and I look forward to bringing the singing melodies, as well as the fizzing fireworks, of Bairstow’s Sonata to life on an instrument that speaks with such a distinguished accent! And Henri Mulet’s sizzling toccata ‘Tu es petra’ is sure to evoke visceral excitement in audience and player alike!

Thomas says he can’t wait to return to Perth and feels privileged to be presenting this year’s Sir Francis Burt Memorial Concert.

I am eagerly anticipating the pleasure of being back at St George’s Cathedral, knowing what a joy it is to make music there. The West Organ is such an exciting, expressive and vibrant instrument that it inspired a program that will demonstrate its many fine qualities.

Last year, Joseph Nolan’s organ concert drew an encore and standing ovation in a packed cathedral, heightening awareness of the moving experience to be had when the organ is played by an accomplished musician. Vision will be projected onto big screens once again this year, showing the incredible skill involved in mastering the king of instruments.

Since then, he has overseen the development of a thriving music program. St Mary’s Cathedral Choir has appeared in concerts and festivals throughout Australia, Belgium and Italy, broadcast on ABC television and radio, recorded several CDs, and collaborated with some of Australia’s finest orchestras, choirs and solo artists.

The Sir Francis Burt Memorial Concert is on Thursday 11 August and runs from 7.30pm to around 9.00pm with a 20 minute interval for refreshments. Tickets are available from Perth Concert Hall.