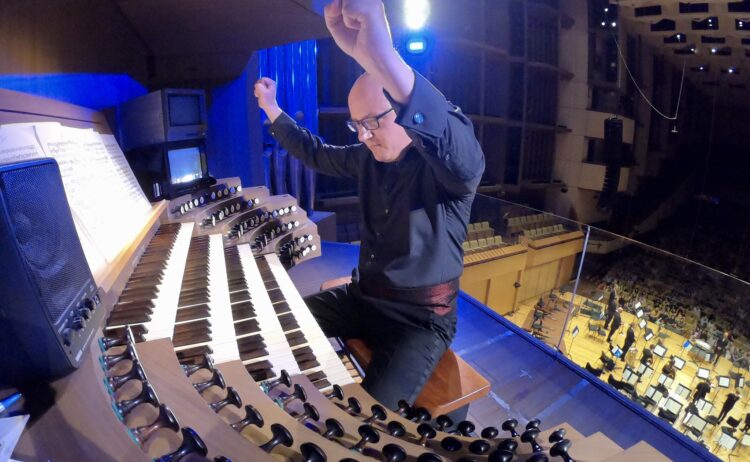 After 12 years in demand around the world, one of the world’s finest concert organists will perform once again in St George’s Cathedral.

Multi-award-winning British-Australian organist and choral conductor, Dr Joseph Nolan, has been hailed by ABC Classic as ‘an extraordinary musician’, by BBC Radio 3 Record Review as ‘magnificent’, by Limelight Magazine as ‘a Colossus’ and by Gramophone for his ‘towering technique, vivid virtuosity and inspired interpretive insight’.

On 17 June, St George’s Concert Series presents the Sir Francis Burt Memorial Organ Concert. This annual recital usually features a guest organist, while Joseph is in high demand internationally as a performer and recording artist. However, this year will see Joseph himself settle into the magnificent organ loft of St George’s Cathedral to play pieces by Widor, Bach and Reubke, plus an Australian premiere by Alkan.

Joseph Nolan – A Rare Opportunity is a wonderful chance to hear Widor’s Fifth Symphony. From New York to London, Joseph’s recordings of the complete organ works of Charles-Marie Widor are considered the benchmark set, and have been broadcast around the world.

Gramophone described the collection as ‘one of the most remarkable box sets ever released’, and The New Criterion placed it alongside those of the world’s greatest organists – Daniel Roth (St Sulpice, Paris), Christian Schmitt (Bamberger Symphony) and Pierre Pincemaille (one of France’s most legendary organists) – stating: ‘The Nolan is particularly fine.’

Joseph’s next CD collection will be the complete works of Charles-Valentin Alkan, to be recorded in Paris as soon as international travel resumes. In his forthcoming concert here in Perth, Joseph will present the Australian premiere of Alkan’s Impromptu on Luther’s chorale, ‘A Mighty Fortress is God’, as well as JS Bach’s Passacaglia in C Minor and Julius Reubke’s Sonata on the 94th Psalm.

While all four are amongst the most technically challenging works ever written for the organ, Joseph explains why Alkan’s Impromptu is the most difficult:

The Bach, Widor and particularly the Reubke are regarded as some of the most technically difficult writing for the organ, but frankly, they are akin to playing ‘Teddy Bear’s Picnic’ at half speed compared to some of the organ music of Alkan!

A mysterious figure in Parisian musical life in the nineteenth century, Alkan was close friends with Chopin and Liszt, who both regarded Alkan as having a superior keyboard technique. This could explain why his Impromptu was written for one player but later transcribed for two pianos. In his biography of Alkan, Ronald Frost says: ‘The Impromptu makes inhuman demands upon a single player.’

Grab the chance to hear world-class organist Joseph Nolan perform these spine-tingling works in St George’s Cathedral. Vision will be broadcast from the organ loft onto large screens to enhance enjoyment, and the Cathedral now has climate control for your comfort.